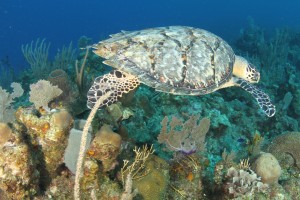 Roatán, Honduras, Feb 2009
The other students were drinking some beers on the balcony at the Spanish School. It was a party night in Bocas del Toro, Panama back in October. But I didn’t feel like partying.
I was watching a Canadian documentary film called Shark Water that Julién had been telling me about,
“You must see this film, it is a very nice film.”
Communicating with Julién was quite amusing. His English was basic, my French even worse and our mutual Spanish barely born. But we were quite fond of each other, especially after one particular night of beers and reggae dance. A combination of drunken laziness and a rather splendid tropical storm persuaded me to abort any efforts to get back to my host family. Instead Julién and I went back to the school’s hostel to spend a few hours talking about fish, philosophy and making words out of the remnants of a magnetic alphabet on the fridge. After extensive research in multiple languages, the best phrase that could be made was “Me gusta Juliem (I like Juliem(?)), World boy XX.” Absolutely hilarious at the time, I can tell you. Testimony to its greatness was that it was still on the fridge when I left Bocas almost 3 weeks later.
The film was about a young Canadian and his efforts to conserve shark populations throughout the world. It was startling. The footage of him and sharks swimming together was amazing, he was petting and stroking them, they knew him. There was footage of hundreds and hundreds of sharks swimming together in the deep blue. The sharks were so beautiful, with amazing sensory perceptions like the ability to read human emotions. They lived in beautiful earthly paradises like the Galapagos Islands and a place that really caught my imagination, Isla del Coco. The film focussed on the trade of shark fins to make the Chinese delicacy, Shark Fin soup. 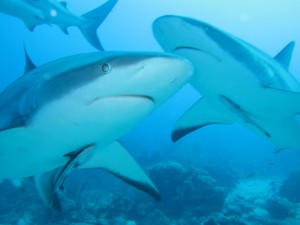 As the other students were getting merry and laughing, I was in another place. The film was having a profound effect on me. The beautiful images of the graceful sharks were being replaced by images of live sharks being caught, having their fins sliced off for soup and then thrown back into the ocean to bleed slowly to death. The authorities were doing little to stop it, in fact, the filmmaker was on the run from the Costa Rican police. Sharks are the top predators in the oceans like the beautiful big cats on the land and vital for keeping its delicate ecosystems in balance. But unlike the big cats, very little protection is given to sharks from the greed of their only predator – humans.
Julién came to ask if I thought it was a nice film and to check I could understand the English ok. I was in tears. Something about the wounding of the sharks in the deep had touched me in the deep.
“Nice is not the right word. It’s horrible. But Julién, I know some people who might be able to help. I will do what I can. And Isla del Coco sounds like paradise.”
Isla del Coco is an island 300km off the pacific coast of Costa Rica and a pristine nature reserve, similar to the Galapagos islands in Ecuador. And Julién was planning to go there…

A couple of months later, I got talking to a woman in a dive shop in Montezuma, Costa Rica, explaining that I was working on the turtle volunteer program. She asked,
“Have you met Mario yet? He’s working on the project but he used to work with us as a dive instructor. You should talk to him about Isla del Coco, he’s worked out there.”
“Does he speak English?”
“Not really.”
Over the next few weeks I had a few conversations with Mario about Isla del Coco as best I could in Spanish. It sounded unreal indeed. No visitors are allowed onto the island, they have to stay on their boats. There are hundreds of species of animal that only exist on these islands. Under the sea there are thousands of hammerhead sharks but even since the year 2000, the numbers have declined remarkably. The water used to be thick with sharks but no longer because of heavy fishing for shark fins. 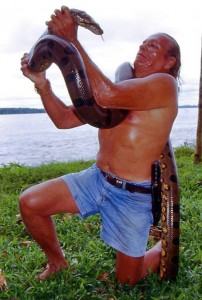 He told me that there was a treasure boat sunken by the famous pirate, Captain Morgan. Bill Gates has created a fund of $10m to patrol and protect the delicate corals from the damage that looters would cause. It was lucky I had read an article about a sunken treasure boat off the coast of Namibia in National Geographic en Español, otherwise all this would have been lost on me.
Perhaps surprisingly, this is not a story about my journey to the sharks and treasure boats at Isla del Coco. Diving there requires lots of diving experience, lots of days on a boat and lots and lots of US dollars. It was tempting to push myself through the necessary diving training at breakneck speed, change my flight schedule and delve deeper into the “House Replacement Fund” to make it possible to join Julién. But despite the obvious attraction, I realised that I needed to learn diving slowly and steadily. There was more to diving for me than just learning the technical skills.

One day, I might tell the pretty good story about how I came to book my round the world ticket, Lady Christy K is prime witness. But once the purchase had been made, I thought it would be a good idea to look at the Lonely Planet guide to Central America. I scanned some of the maps and observed which places had the strongest pull for me. The islands of Bocas del Toro in Panama called me. But Roatán was louder, bigger and brasher in its call. Even when I was in England, I knew I needed to dive here even though I had never met anyone who had been here.
Roatán is an island off the Caribbean coast of Honduras. It is probably brasher, more developed and slightly less laid back than Bocas del Toro, which is beyond horizontal on the anti-Richter scale of chilled-out ness. This is an island built around diving. There are people who come here for weeks and never go to the beach. It attracts a reasonably mature crowd, the backpackers go to the sister island of Utila where there is better choice of budget accommodation.
However, budget accommodation can be found in Roatán…
The taxi driver from the airport was funny. He told me that I spoke Spanish with a Costa Rican accent (woo woo!) and was trying to tempt me to stay at various places for $50 per night with air con and TV. But this was way beyond my budget. I cracked out the Lonely Planet and told him I wanted to stay at Valerie’s. He hadn’t heard of it. But it was easy to find on the single dirt track that comprises West End, the main tourist drag on Roatán. They had a bed for me for $5 per night, or free if I go diving with Reef Gliders across the road. So I booked a block of 10 dives with them. To be honest, I still think I got ripped off.
I didn’t get a bed of my own, I was sharing with several little insects and woke in the morning covered in itchy red bumps. Running water was sporadic and the kitchen was frightening. There wasn’t really a door on the dormitory, which was a bit scary when there was a storm one night. It was lucky I had brought a portable cage to store my valuables.
Valerie is described by people here as a “character”, which is a euphemism for “alcoholic”, I think. An American living here for 30 years and trying to sell her place with no success or further investment in 5 years, eek. I overheard her accusing a lovely French couple of poisoning her cat. The poor guy understood the charges against him but his English wasn’t good enough to defend himself. I closed my eyes and pretended to sleep in the hammock. This was not a situation I wanted to get mixed up in. Perhaps more disturbingly, she gave me a lecture about how everyone on the island would try to rip me off and that if anyone gave me trouble then I should say I was Valerie’s girlfriend. Or perhaps not…mmmm…
Redeeming features about Valerie’s:

My real-life shark adventure started when John and Luke came to join Stephanie and me at our table at a chicken restaurant. Luke had one of the craziest travel stories I have ever heard – he ended up living in a handmade hut on the beach for almost a week in Havana, Cuba after he was robbed and had no feasible means of getting money or changing his plane ticket. 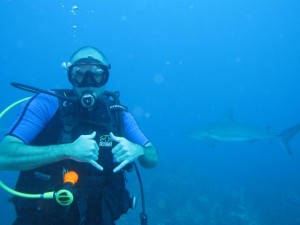 John is the kind of guy who can make things happen, a contract negotiator and attorney from a tough part of New York with a big, beautiful heart. And he wanted to get a group of people together to do a shark dive… Under the influence of a fair amount of beer, I had only one possible answer…

And so in the morning I realised that I had committed to diving deeper than I had ever gone before with a school of sharks…Mmmm….I needed help.
Help came in the form of a blond Californian called Bisch, who had also spotted that Stephanie had not yet been diving on the island. This anomaly needed to be corrected. So he took us out for a training dive in Half Moon Bay, to acquaint Stephanie with Scuba Diving and to acquaint myself with him as a diver before we go down 21m (70ft) to meet the sharks. It was really special diving with my friend on her first ever dive and also to realise that I was going to be absolutely fine with Bisch. 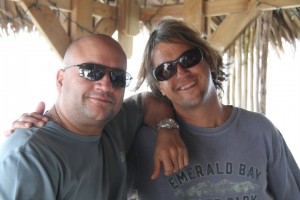 I’m not the world’s greatest diver, I won’t learn how to go deeper than 40m (130ft) or become a Dive Instructor. And maybe I will never go to Isla del Coco. But I don’t need to prove anything. But I finally feel like as long as I’m down there with the right people, I’m going to be safe. And with that knowledge, hey, I can actually have fun.
And so this evening, I sit in a hammock swinging slightly to confuse the insects, typing relaxed and calm with the realisation that maybe life doesn’t need to be a painful and frightening experience. Maybe I can relax and let myself be supported by the deep water of life to see and feel some beautiful things.
Maybe…

Nicaragua: The Powers That Be →